Handiwork of architect  Francisco Javier Sáenz de Oiza, the Torres Blancas building is a a landmark of Madrid’s architectural history. Standing 74 meters high and with a strategic location (at the crossroads of Corazón de María St. and  Avenida de América), it’s easily visible from almost any point of the city.

Torres Blancas was the first work of Sáez de Oiza – designed in 1961 and built between 1964 and 1969 – and his most representative one, winning the European Excellence Award in 1974 and being internationally renowned as  a modernist and vanguardist architectonic symbol. In the Torres Blancas building, Sáez de Oiza proposed a synthesis of rationalism and organicism as suggested by one his client, Juan Huarte,  owner of the construction firm of the same name that executed some of the best building and homes of the 60s and 70s. Huarte supported culture in all its disciplines, sponsoring specialized publications showcasing contemporary culture. This building was a breakthrough and even today is an elegant example of  high-rise residential architecture.

The interior is no less spectacular, since the elegant, rounded shapes of every room constitute a nod to avant-garde architecture, sophisticated design and exclusivity.  In fact, none of the materials and structures are mass-produced: a vaulted ceiling, with rounded doors and curved baseboards, as we can appreciate in this link, where we can see an spectacular penthouse for sale, managed by Jaime Valcarce Consulting Inmobiliario. 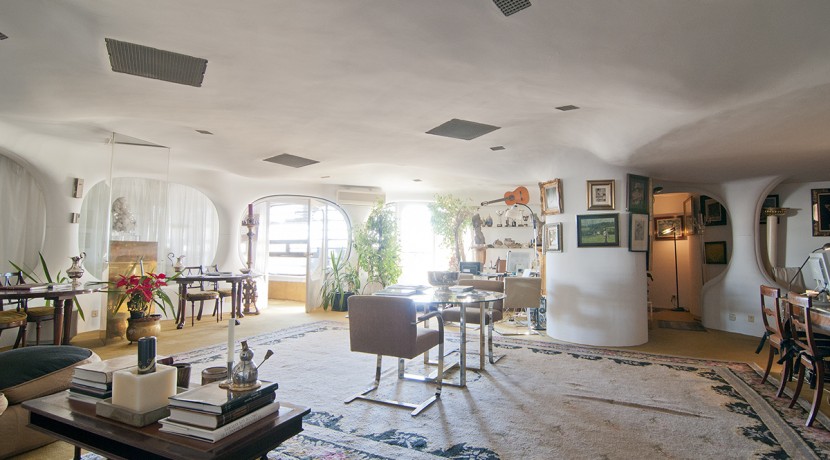 It is, therefore, a vast high-rise building consisting of a set of unique houses. Very influenced by Le Corbusier -recreating the idea of building raised gardens- and Frank Lloyd Wright – which inspired his organic conceptions with his Price tower – his design is originated from a organic point of view, allowing the building to grow as a tree or as a tree cover, trailed vertically by staircases, elevators and installations, as if they were the roots of a big tree that rise up its huge trunk.

Likewise, the distribution of the bedrooms, bathrooms, kitchens and living rooms, with vast curved terraces that don’t touch each other, cause a “cluster” appearance, allowing light to enter the whole house, a nuanced light filtered by the vegetation on the terraces.  The concrete building expands in the upper area as a treetop, opening to various circular platforms that establish a dialog between architecture, vegetation, interiors and landscape.

How we commercialize your property? Properties for sale/rent

You need to log in to use member only features.